No Result
View All Result

It was more than six years ago that Canada matched its all-time performance at the Davis Cup.

Retired doubles legend Daniel Nestor watched with his teammates in jubilation on April 7, 2013, as a then 22-year-old Milos Raonic defeated Andreas Seppi 6-4, 6-4, 3-6, 7-5 in Vancouver to give Canada a 3-1 victory over Italy and send the squad to the semifinals for the first time since 1913.

“There’s so many memories over the years, you play for 25, 26, 27, whatever years. There are so many memories, but that was definitely close to the top for sure,” recalled Nestor, a 47-year-old Toronto native who, along with Vasek Pospisil, helped put Canada up 2-1 with an “epic” four-hour-and-27-minute doubles defeat of Fabio Fognini and Daniele Bracciali a day earlier.

“When you win, you’re through to the next round. We made the semis for the first time, so everyone’s excited and definitely when we won it was (huge).

“Yeah, for sure we all celebrated together on the court after,” he continued.

Nestor, who retired in the summer of 2018, is now acting as the country’s doubles coach as it prepares for the Davis Cup Finals, which begin on Monday in Spain.

While the veteran of the international competition — he capped his career by donning red and white in Davis Cup play for the 53rd time — said Canada boasts its greatest squad of all time, and has for the last couple of years, he wasn’t ready to make any grand proclamations about it being able to top that historic run in 2013.

“The young guys played great to get here and they’re playing great,” Nestor said on the phone Sunday from Madrid. “They’re even better than they were eight months ago, so I think everyone’s expecting big things.

“A lot of teams can come here and say they want to win, and I think Canada’s one of them, but it’s impossible to say what’s gonna happen, so it’s one of those things where you have to wait and see,” he added, noting that advancing past the U.S. and Italy in the round robin of Group F won’t be a cakewalk.

The “young guys” Nestor is referring to are rising stars Denis Shapovalov (world No. 15), of Richmond Hill, Ont., and Felix Auger-Aliassime (world No. 21), of Montreal, who are 20 and 19 years old, respectively. 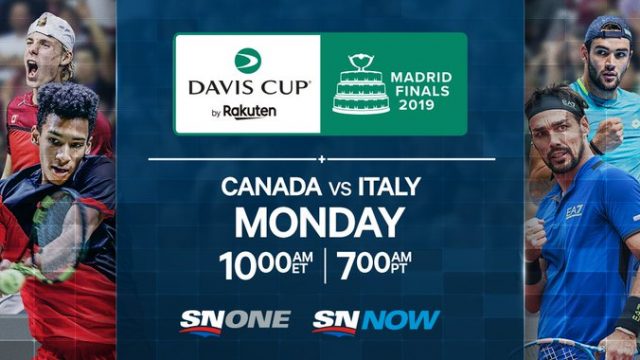 Shapovalov is fresh off a run to the final of the Paris Masters and his first title at the Stockholm Open. Auger-Aliassime was a three-time ATP finalist during a breakout 2019, but suffered a left ankle injury that forced him to drop out of the NextGen ATP Finals earlier in November. The 29-year-old Pospisil (world No. 149) from Vancouver and Brayden Schnur (world No. 94) from Toronto — stepping in for Raonic, who dropped out with a back injury — round out the squad.

Bichette believes the Blue Jays need to create their own adrenaline, momentum without fans

“I feel good,” said Nestor when asked to evaluate the team’s current form. “I mean, Denis is playing (great), made the finals in Paris, won in Stockholm, Vasek is playing better than he has in a long time and he’s healthy, which is important, and watching Felix the last couple days, his fitness might not be what he’s used to, but he’s healthy, which is important, as far as his injury. So I think, you know, it’s a good opportunity.”

Even though Raonic’s absence hurts, Nestor said its a contingency they were, unfortunately, prepared for.

“We kind of have been used to playing without him at times,” Nestor said of the oft-injured, hard-serving 28-year-old, ranked No. 31, from Thornhill, Ont.

“Obviously, it’s amazing having him on the team, considering his abilities, but it’s been a little bit sporadic over the last like five years. It’s just something that we’ve gotten used to, and no one’s really too preoccupied with that … From a team standpoint, not having him is obviously not the best scenario, but something that we’re kind of accustomed to — but at the same time, it’s not the end of the world.”

One element that should, however, work in favour of the Canadians is the event’s new, condensed setup, which my colleague Ryan McKenna detailed here.

“It’s a shorter format, two out of three (sets), and our guys are guys that like to be aggressive and play faster, and these conditions are very perfect for that, and I think it definitely plays into our hands,” said Nestor, noting it should suit Shapovalov and Pospisil, in particular, and the indoor venues should benefit the entire ensemble.

“So it’s a matter of executing, (and) we’re more than capable of doing it. But you have to do it. At the same time, we’ll see what happens. But I think everyone likes our chances and everyone likes the format and … from a fan’s perspective, it’s a lot easier to understand than the old format, and I think it’s gonna be great for spectatorship, for sure.”

Though Canada remains in the dark about the individual matchups against the U.S. and Italy, Nestor said the youth-laden squad knows it will be facing other teams’ best players regardless, and it has to get off to a quick start.

“I think for sure understanding that it’s not one of those situations where you have time to ease into a match, you gotta come out (fast) — and it comes with the conditions, too — I mean, these guys are coming here to play fast tennis and aggressive tennis, which is what they do well anyway,” he said.

“So I don’t think there’s that much to be said. It’s just understanding the goal, and knowing your game is solid and trying to implement it, and you’re winning or losing playing the way you play, so it’s kind of accepting that scenario and trying to make the most of it.”

Bichette believes the Blue Jays need to create their own adrenaline, momentum without fans

AP Source: Kawhi Leonard’s arrival at Disney will be delayed

Eddie Olczyk: I think the games have a chance to be unbelievable

No Result
View All Result